Had an awesome time with Rangers Matt Grey and Chris Winton of Anne Arundel County Park and Recreation this afternoon scouting out the cactus at Weinberg Park in Pasadena. The site was near an old homestead. We could see two stone columns which could have come from a gate entrance. I understand that there is other evidence of a homestead at the site. 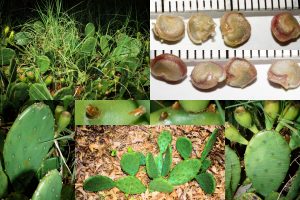 The site showed definite signs of anthropogenic disturbance likely from the folks who previously lived here. The soil was well-drained sand on a bluff above the bay. There is a high probability the cactus was planted and they were growing in an area about 15 feet by 15 feet. There were outlying scattered plants in the area as well. 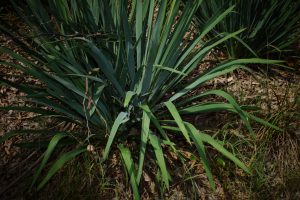 We also spotted some Yucca flaccida (weak-leaf yucca) which was planted nearby.  This, when combined with the planting of cactus, suggests that someone wanted to create a desert-like appearance at this site.

The morphology of the plants conform with a determination of Opuntia humifusa s.s. We did not find spines on any of the plants and there were mostly 4 to 5 (6) areoles per diagonal row on the cladodes. The seeds were 4.0 to 4.8 mm long.

We plan to re-visit the site in the spring to note the flower coloration.