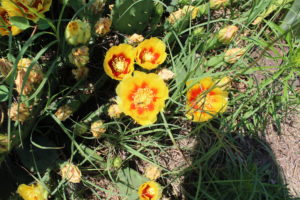 Did you know that there are three putative species of cacti in Maryland?

Lucus Majure, PhD. at Florida at the Museum of Natural History in Gainesville has recently updated the taxonomy of the cactus native to the East Coast of the USA. According to his treatment, there are three species native to Maryland. So it would be an awesome citizen science project if we could document the populations in Maryland, and try to identify the species name of each population. Many populations have already been identified based on observation by citizen scientist and historic herbarium collections. Here is a web page of sites we have compiled thus far: http://blog.botanybill.info/?p=5021 The aim is make this the best reference for cactus populations in Maryland. I will try to update it as much as I can. Even for populations already located, we will still need to document which species they are.

My proposal is for individuals or teams to adopt sites, preferably ones that they would have easy access to. They would first document the locations, then they would look at the plants to see if we can determine which species it is. They would also take close-up photos of the parts of the plants for identification purposes. If they are so inclined, they could collect voucher specimens for donations to herbaria after obtaining permission from the land owner or custodian.

Below is a simple dichotomous key that I have drawn up to help differentiate between the three putative species.Basically we are looking at the coloration of the flowers and the presence or absence of spines.

Dichotomous key for use when plants are blooming:

1. Flowers are mostly yellow with a reddish/orangish area near the base of the tepals. Pads have spines – Opuntia cespitosa

1. Tepals of the flowers are entirely yellow from base to tip.

1.Don’t be fooled by the center parts of the flower which can be red or orange. Focus on the tepals.

3. When looking at the plants, examine as many plants as possible to get a good idea what they look like.  There can be a lot of variation in characteristics even within one population.

4. Please contact me if you have any questions. The only dumb question is one that should have been asked but wasn’t. My email address is botanybill (at) verizon.net

5. Please let me contact me at the above email address if you know of any populations not listed.

NOTE: This document is a working draft and will be added to as necessary.