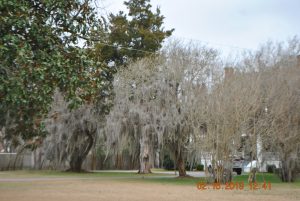 Today I had my first encounter with Spanish Moss (Tillandsia usneoides). We saw it growing on trees throughout Florence, South Carolina. Spanish moss frequently grows on trees in tropical and subtropical regions. Around Florence at least, they seem to be partial to the Southern Live Oak (Quercus virginiana). It is native to much of the Southern United States from Southeastern Virginia south to Florida and west to Arkansas and Texas. It also is native to Bermuda, Mexico, the Bahamas, South America, Central America, and the West Indies. It has reportedly become naturalized to Queensland, Australia and French Polynesia. It is not a true moss but rather it is an epiphytic flowering plant. Here are a few pictures we took of it. Some trees were almost completely covered with it. 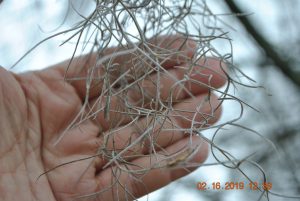 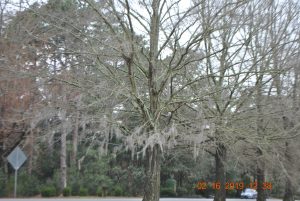