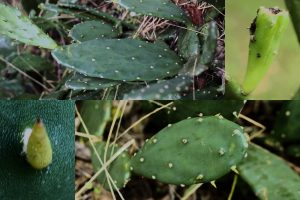 This time Matt Beziat and I forayed the Wooton’s Landing Park to look for some cactus that Matt had spotted previously. We found it along the perimeter trail which parallels Sands Road. The small number of plants at this site were atypically elongated because they were growing in the shade. On the way out of the park, we spotted another patch under a guardrail by the parking area.

The plants were spineless and had three to four areoles per diagonal row. This conforms with a determination of Opuntia humifusa s.s.