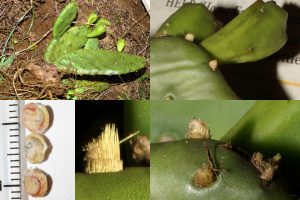 Had an awesome time today with Michael Ellis, park ranger and invasive plant specialist for the Maryland-National Capital Park and Planning Commission, Parks and Recreation. We visited two sites where prickly pear was growing.

FIRST SITE – The first site was an open meadow near the Queen Anne Canoe Launch Patuxent River Park. The meadow was a restoration project and had an old field look about it.  Based on the fact that the cladodes had no spines and mostly four or five areoles per diagonal row, these plants appear to be Opuntia humifusa s.s. We will be returning in the spring to look for flowers in bloom. 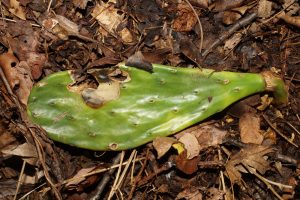 SECOND SITE – The second site was an old driveway off of US Route 301 in Bowie. The woods were overgrowing the driveway which was apparently no longer in use. We saw a few plants on the left side of the driveway, which we assumed to be planted by past owners.

Many thanks to Michael for taking time out of his job to show me around.